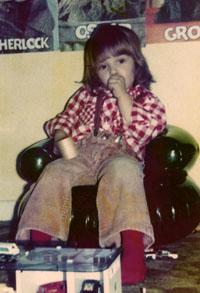 Good tools and a comfy chair

Raised in Dinslaken, Germany. Moved to Dortmund, Germany for studies of computer science in 1991, living here since. I really like it here.

Started programming in 1984 at the age of 13 with a Commodore 64. After learning basic and finding out that there was not that much one could really do with Basic V2 - despite filling loads of floppies with attempts at writing text based adventures - started programming in 6510 assembler and continued to do so for several years, this time filling loads of floppies with game trainers, intros and unfinished side scrolling games

Coded demos and cracked games - the usual stuff. Got an Amiga 1000 in 1986 and - due to lack of a harddrive - continued programming in assembler, this time m68k of course. Lost interest in programming Vectorball demos and OCS related stuff for a while, instead developed an interest in girls … until in 1994 I made friends with people who owned some NeXT computers. Awesome machines!! Started to program in Objective-C on NeXTstep 3.x and instantly felt at home. Wrote first database applications as NeXT's came with Sybase - quite expensive stuff at that time, you didn't see that often outside commercial development. Today I own two Turbostations and one Colorstation (running Oracle 6!).

After moving into the Kult-WG (we had a 16.8k leased line in 1995 with permanent internet connection - highly unusual at that time!) worked part-time as a network administrator. After one year turned into a programmer again, this time working full-time for Object Factory. Programmed in WebObjects 2.x & 3.x there and wrote a couple of AppKit programs. In 1999 quit my job at Object Factory and moved on to Pixelpark, continuing to do WebObjects applications. In 2001 moved from Pixelpark to Codeon, doing some WebObjects but mostly J2EE stuff … worst technology ever hyped. Also did some .NET stuff in C# (which basically is the same boring stuff as Java but with few notable improvements).

In 1999 Nat! convinced Erik and me to join his ongoing Open Source onslaught dubbed Mulle kybernetiK. Following my natural instincts as an (ex-)administrator I set up the Mulle kybernetiK computing facility™ and maintain it since. From time to time I also release some of the software I write in my spare time in the hope that somebody might find it useful.

After leaving Codeon in early 2003, turned my attention to Music (I had another bass crafted by Siggi and joined GOD2B). On the programming side, I teamed up with Helge and dived into OpenGroupware.org. Opengroupware.org itself is pretty impressive, but the underlying technology is the real star in my opinion - Helge implemented a WebObjects clone, which is by far superior than the original by Apple. Besides doing some contracting work, I always did some fun projects, i.e. integrated the SOPE core into Bookmarker and created a hybrid technology for integrating WebKit into AppKit on Mac OS X.

In 2005 turned my attention a lot more to music, this time adding Moshcircus to my portfolio of bands… which led to excessive clubbing and gigging and a really funny time in general.

In 2007 Carsten Gehle, the guy who spilled coffee over my (only pair of) trousers I had with me on the flight to WWDC 2000, asked me whether I'd like to work for Celemony in order to help create the latest version of Melodyne , the version incorporating something called DNA . So, I'm currently working for Celemony as a contractor and really have a good, fun time there - really cool company!

Do you know fortune, the UNIX application? There's a special option -o which gives you offensive cookies. Because these are particulary funny, I wanted to read the database - but heck, it's encrypted. Ever seen pages full of ROT13 blurb? Well, there you got a chance to see. The funny thing is, some names (but not many) are still pronouncable and look like real names. Just like Tethpub Znek.

Just a few days after finding out about this fuenf created my first unix account outside University on the famous NeXT cube anarch. Instead of using my real name I remembered the ROT13 stuff I just saw a few days earlier and thus stuck with the handle znek … until today! *sniff*