Follow the instructions in foundation-developer to install a new development environment.

To update an existing mulle-objc project, you should clean the (global) archive and mirror cache.

Then upgrade each project and rebuild:

This should give you no trouble.

As the Foundation stabilizes, the amount of changes to the core mulle-objc system is not very large. Which is a positive. So maybe the most exciting aspect of this release is the…

To ease the first steps into the mulle-objc work, I wrote two small pamphlets or guides on how to get started with mulle-objc Development with IDEs: 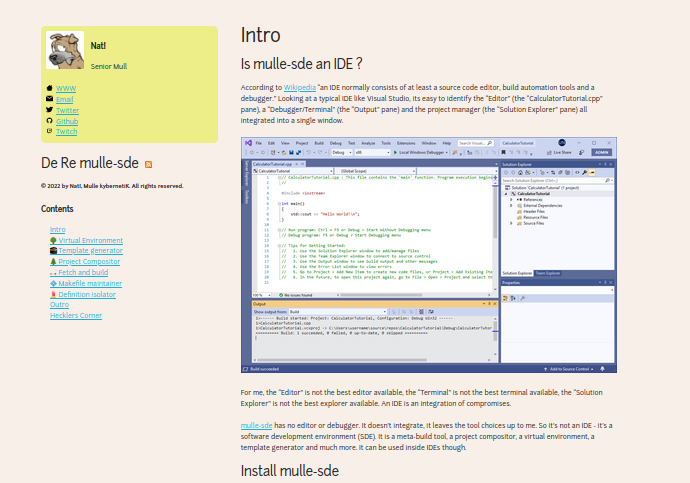 and how to profit from using mulle-sde in De Re mulle-sde: 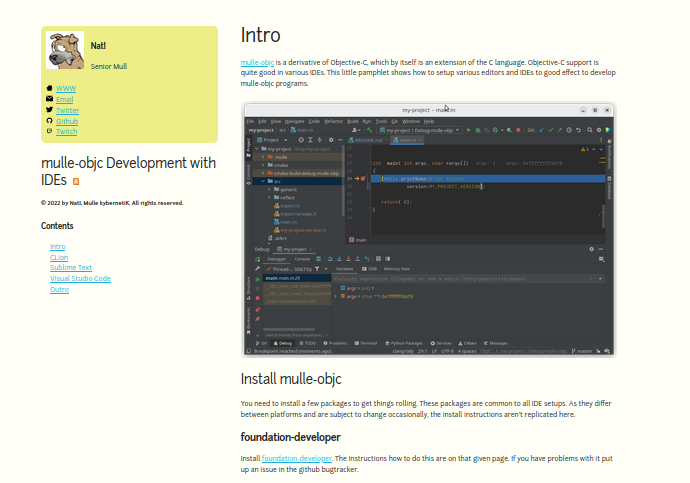 These are quick reads, so anyone can get going fast and he/she gets a grasp onto what is going on.

Next year I would like to rework the developer guide. I envision a reorganization into multiple pamphlets, like: intro the language, intro to the runtime, intro the MulleObjC.

This is a class related to NSOperationQueue, but is somewhat more low-level. You don’t queue NSOperations, you put in NSInvocations. Also there is a defined worker thread, that executes the queue in the background. So invocations are executed in a serial manner.

This implements the NSUUID class with the help of the uuid4 library.

As the project scope broadens, the mulle-sde toolset needs to cope with projects that may be built against different C libraries. To support mulitple C libraries and their possibly different C compilers, mulle-craft had to be reworked. See De Re mulle-sde : definition separator for a quick intro about inherited definitions.

All the various mulle-sde scripts are now more readable, because I could externalize a lot of boilerplate code. Any mulle-bashfunctions script - which is the shell script library of mulle-sde - now starts with #! /usr/bin/env mulle-bash. This loads mulle-bashfunctions, possibly changes the shell execution environment to zsh or bash and then executes the script.

mulle-make has been partially rewritten, to make it somewhat easier to read. mulle-make now uses cmake exclusively for compilation of cmake projects. It used to divide this task up to cmake and make/ninja. But that is just not necessary anymore. Specify the generator you want to use with the -DCMAKE_GENERATOR=ninja for example.

I wanted to write complete Windows support for the Foundation for this release, but I didn’t have the time. Since I am rarely on Windows, there was not enough of a natural impetus to do it.

There was too much work on the fundamental parts of MulleUI, that I could not get a usable enough widget set together for a release. I feel, that the first release of MulleUI must be good enough, that it is instantly usable to create cross-platform applications. That’s still a bit off.

This is the list of release notes of the various projects. Enjoy the read :) Projects with only a small bug fix have been omitted for brevity.

The most interesting changes are the additions of MulleObjCUUIDFoundation and MulleInvocationQueue. Otherwise some code moved from MulleObjCContainerFoundation to MulleObjC. Overall not a lot has changed here.

MulleObjC gained some cool features. The actual runtime is pretty much unchanged and its “+load” version remains as it was before.

The mulle-clang compiler has two bug fixes. There is now not only support for musl but also for cosmopolitan. Some old repositories died, and new repositories sprang to life.

mulle-dlmalloc and mulle-mmapallocator are new additions. They are somewhat experimental. Due to changes in mulle-alloctor mulle-testallocator has also been affected in an incompatible way.

Due to changes in mulle-alloctor, mulle-aba freeing API was affected.

mulle-musl-gcc has moved to mulle-cc/mulle-musl-cc and is really quite different now.