mulle-clang adds another runtime Mulle. Mulle is a variant of FragileMacOSX. Ideally mulle-clang is a superset of the clang compiler, being able to also compile Objective-C code for the other platforms. But that is currently NOT possible. 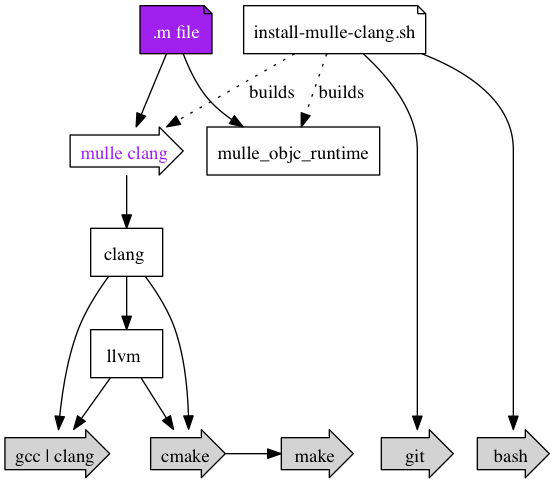 In order to compile an Objective-C file (.m), you need the runtime mulle-objc-runtime and the mulle-clang compiler. Both are built using a shell script install-mulle-clang.sh.

The toolset requirements for the compiler itself are not any different from those of clang. Building mulle-clang by hand can be a bit daunting, but install-mulle-clang.sh should make the build painless.

bash is needed for the installation script.

git is used to retrieve mulle-clang.

cmake is a cross-platform Makefile generator. It is used by mulle-clang and llvm.

A standard C compiler is needed to compile mulle-clang and *llvm.

Library | Use ————————- | ————- mulle_objc_runtime | the Objective-C runtime you need to compile and run Objective-C code. It has additional requirements. (See: mulle-objc-runtime, technically speaking)