So now that we know how a method is looked up by its selector, let’s look at the few particularities of the mulle-objc method cache in a bit more detail.

Read Let’s Build objc_msgSend and Obj-C Optimization: The faster objc_msgSend for some more background on the used cache algorithm. It won’t be talked about here.

A cache entry is just a pairing of a selector (SEL) with its implementation (IMP). It is known, that the cache entry size is always a power of two.

The cache is a variably sized struct. It contains an array of cache entries, with some information about the cache itself:

Once a cache is created, size and mask never change. It is not possible to grow or shrink a cache. A class that needs to store more entries will create a new,larger cache and replace the old one with it.

A simple cache of size 8, containing one entry could look like this:

To index into the cache we take the address of cache->entries[ 0] and then add the masked-off bits of the selector to it.

As you can see the variations are in three bits only. These bits make up the mask value.

The selector is a FNV1 hashed value it has fairly good entropy over all bits, it doesn’t really matter where we grab the bits off to index into the cache all of them are equally likely to contain a 0 or a 1.

And that’s how mulle-objc indexes into the cache.

We could diffuse the bits even further by using a murmur hash avalanche on it, but I believe this to be unnecessary.

This is superior to other runtimes, which use selector addresses. Addresses do not have good bit entropy and often need to be shifted appropriately.

The cache pivot is a similar idea to the way the isa pointer is stored in instances. See: mulle_objc: object layout, retain counting, finalize.

Instead of memorizing the beginning of the cache, memorize the most interesting part of it. The compiler is able to produce better indexing code into the cache if the initial pointer is pointing to &entries->entries[ 0] instead of to just to the cache.

This is a mind-map of what a method call like [foo doSomething] actually does. 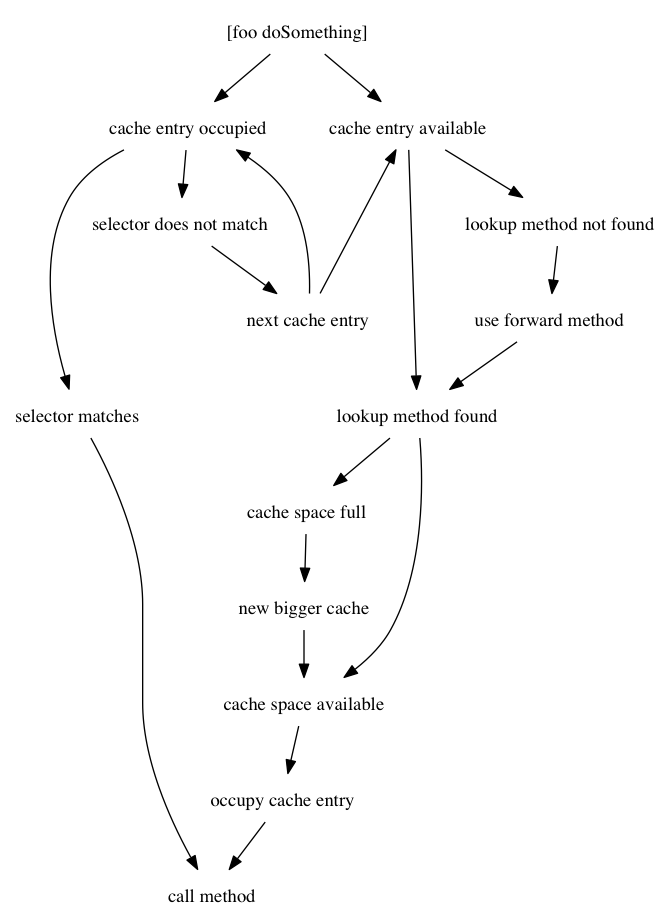 For often used selectors it would be preferable to ensure, that there are ahead of other colliding selectors to have the fewest or no cache collisions.

There are provisions for that in the runtime:

Preloading gives a method a preferable entry in the cache, hopefully allowing it to be indexed immediately.

Ultimately the cache is completely filled up and all calls will be fast.

Continue to mulle-objc: divining the guts of message sending.