Continued from mulle-objc: hashes for classes, selectors and protocols

mulle_objc uses a uniform memory layout for all instances. 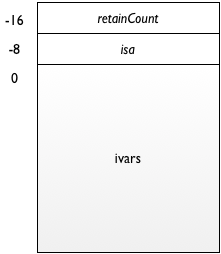 The isa pointer is no longer part of the self-> accessible instance variable area. Therefore isa (currently) does not exist in mulle-objc.

You can access the isa pointer with mulle_objc_object_get_class and it’s not unlikely, that I will teach the compiler to use that when accessing self->isa some time in the future.

Problems with the legacy retainCount/dealloc architecture

The rules are pretty simple, when the retainCount is decremented to zero, an object gets the -finalize message first (if -finalize has not been called before) before -dealloc. If the retainCount remains unchanged throughout -finalize, then -dealloc is called. It is guaranteed that -finalize is only called once.

If one wants to finalize “manually”, one should use -performFinalize as this properly massages the retainCount. Directly calling -finalize from outside the runtime is an error.

In most ObjC runtimes -dealloc is used to free resources and cut links to other objects. Now -dealloc will ideally at most contain -release calls and [super dealloc]. Anything else can be done in -finalize. The idea is, that a finalized object is still useable in the object hierarchy, but not active anymore. A good example, where this is useful, is a window controller, where the window close button has been clicked. I, t may still redraw, but it doesn’t react to any event actions any more.

That’s just the way it is, some things change

As I removed the flexibility of the way objects are structured and embedded the retainCount by decree, there is no real point in overriding -retain/-release/-retainCount anymore (except possibly for debugging). Because of this -retain and -release are now compiled into nicely inlinable atomic functions, with no method or function call overhead.

Continued to mulle-objc: inheriting from protocols