It’s about time to test the waters, and see if I can ween myself off the Mac and OS X. It’s been a good ride, but I don’t like the direction that train is going. 1

To make Linux 2 more enticing, I wanted to build a Killer Box for a developer.

The Mac Pro has 1 Xeon processor and 2 GPUs, but what I really want is 2 Xeon processors and 1 GPU. I don’t make movies or sort pictures, I write code and I compile.

There are not many dual-CPU 2011-3 board manufactures on the market for the price range I am interested in. The most readily available are Supermicro and ASUS. Supermicro has apparently a good reputation as a multi-CPU board maker, ASUS has a good reputation as a single-CPU board maker, but multi-CPU board not so much. The new ASUS boards support the M.2 SSDs though. Supermicros do not out of the box, you need to buy an additional PCI-E adaptor. That fills up one of the precious slot.

It took me a couple of weeks to get a stable system. That was partly due to components not being as readily available as advertised, and also due to lots of stupid driver and other software problems. Some more stories for another blog entry. 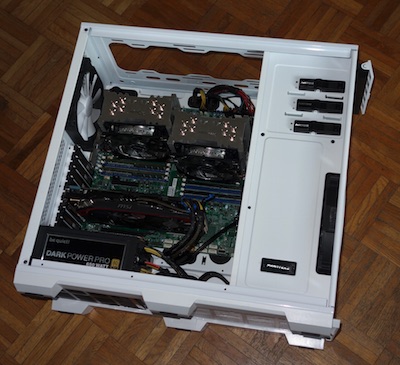 I tried out the ASUS Z10PE-D8 WS, wich looks spiffier, has more features and whose BIOS is more modern. Alas the first board was crap. The second board in hindsight was probably OK, yet it didn’t give me that warm fuzzy feeling, when it also crashed during memtest86+ and then needed multiple CMOS resets to come back to life again.

The Supermicro X10DAi is a bit more oldfashioned but it just works. It can take more RAM, its BIOS comes up faster - just appears more reliable to me. Out of all the boards Supermicro sells, the X10DA line is pretty much the only one that makes sense as a developer Linux workstation. Tweaktown

On the negative side, the boot process of the Linux kernel is fairly slow (17s) with most of the time mysteriously spent during ACPI setup. I blame the BIOS and will try to narrow this down sometime. Windows 10 incidentally boots up very fast with this board…

The Xeon 2660 is a good combination of a ridiculous amount of cores (10 each) with still decent speed and a tolerable wattage suck at a comparably affordable price (for a Xeon).

Place two on the board and you are running with 20 cores + 20 hyperthreads. How cool is that ? CPUBenchmark

The Enermax ETS T40 are quiet and cool very well. Even in stress testing my CPUs never went over 50 deg. C (out of the case). They are also very easy to install. Only apply about 3/4th of the paste - it is a bit too much otherwise. I didn’t research this part very much though. There may be better stuff out there for less.

The cooler is a bit oversized. With the ASUS board the heatsink fins touch the case lightly. In a dual CPU configuration on the X10DAI the coolers are extremely close, but it’s OK. Legitreviews.

The ArcticCooling Freezer 13 is equally as suitable I think, (I have it in my other boxes) pretty much just as quiet and a bit cheaper. A plus is, that it is not quite as wide as the Enermax. In the end probably a better choice.

I bought 32 GB of Kingston KVR21R15S4K4/32 DDR4 RAM. The first ASUS Z10PE-D8 WS board I had was never completely stable with it. Was it really the RAM or just the board ? It turns out the list of supported memory is extremely (!) small and one probably should take note according to ASUS support. The supported Kingston RAM was actually KVR21R15D4/16, a few characters difference…

Then I used the recommended Samsung RAM. I had the same problems with the ASUS, so I ditched that board. The Samsung RAM works fine now in my Supermicro X10DAI. The Kingston may have worked in the X10DAI fine as well, but that RAM is long gone now. Geizhals

I bought a MSI R9 270x, because I thought it was good enough to do 4K/60Hz (a must) and some limited 3D I just did NOT want to buy NVIDIA again. Register, Torvalds.

Bad mistake, the default “free” driver for Radeon cards, crashes and freezes the whole system badly. With the commercial driver it seemed stable enough, but the UI was very unresponsive. These problems all pretty much disappeared, when I used a comparable NVIDIA card from my Hackintosh. The responsiveness when dragging windows could still be better though, but is usable. Sometimes there is some weird screen tearing when scrolling in Firefox. gtx-660 vs. r9-270x

I will throw more money at the problem and buy a GTX 970, since the R9 270x doesn’t boot with OS X well and can’t replace the GTX 660 in the my Hackintosh, so I need a new card anyways. The ASUS 970 Strix doesn’t need to turn on its fans in desktop mode, sweet. Gonna get this.

I did get it. It doesn’t really help with the crappy Linux graphics performance, but it makes the box VR ready “green” according to the the Steam VR test.

I could also run my Dell UP2414Q Monitor in MST mode (-> 4K/60Hz) with the NVIDIA driver after a LOT of xorg.conf tweaking. Unfortunately that meant, that X11 needed to have Option Xinerama enabled. Option TwinMode always failed for me somehow. Enabling Xinerama disables xrandr. With xrandr disabled, Unity can’t figure out the monitor’s name, thus it can’t set the scale-factor in its dconf dictionary. With a scale-factor of 1 (default) everything is too small and unreadable.

It turns out that the ASUS board can’t boot from this kind of SSD card and neither can the Supermicro. There is another M.2 SSD from Plextor, that maybe would have been better. I think the Samsung XP941 beats it in terms of speed though. This is faster than what the Mac Pro offers. Anandtech

For the Supermicro board I had to buy a PCI-E adaptor. I still need to compile benchmarks with this to see if a PCI-E SSDs really makes a difference. It surely I/O benchmarks well.

This is cheap and just works as expected. They forgot to package the fixation screw though :( And it doesn’t come with a heatsink … Delock

The missing heatsink might be a problem if you really hit the SSD hard for extended periods of time. (ZFS ? :D)

ZNeK: nah, ZFS is greedy for RAM and CPU, but I/O? COW also means (in theory) that it doesn’t wear off your SSD as much… just think about it.

Just for booting Linux, because the other SSD can’t function as a boot device. CNET I also have enough space here to add another Operating System, let’s say … Windows 10 preview f.e.

The Enthoo Pro looks good, got great reviews, best of all, it can take a SSI-EEB board. There are also some Silverstone cases, that work, but the Raven 5, the smallest one, can only take SSI-ECB. A difference I noticed too late. From Raven 4 upward you should be good to go. Then there is also Chenbro and Intel, but those cases are for people who really want the 24/7 server look and price.

The Phanteks is the nicest PC case I ever had. My Lian Li is also nice, but this is even nicer as it has great cable routing and a hiding place for the boot SSD on the back of the mainboard plate.

One negative point: It is missing a hole that is expected with the SSI-EEB board. So the board is held in place only by 8 screws instead of nine.

Installation of the components was super simple.

I buy Be Quiet PSUs by habit. Probably a mistake. I think I overpayed here. You can get a better power supply for less. On the plus side all cables were long enough for SSI-EEB, which has a different layout. That was one of my worries. Anandtech

This specific PSU still works fine, but two other Be Quiet PSU crapped out badly on me, so I don’t want to recommend that company any more.

For the money a XFX XTR 650W 80+ modular power supply seems to be a better choice, but I am not 100% sure that the mainboard power cables are long enough.

How much, how fast, how wasteful ?

The expected Geekbench score should be somewhere around 50,000 for Linux 64, alas Geekbench can’t deal with that many cores yet :) Total cost if you shop around like I did, was pretty much exactly €5,000.

In idle w/o an LCD monitor the whole system is taking up less than 90 W. This is without the case and the Samsung XP941 installed. Noise level is like any other PC.

2 Why Linux Desktop appears viable to me now

Excellent write up, seriously considering going dual xeon e5-2xxx (6cores?) on a supermicro myself, especially since myself and a friend chipped in and built a Xeon E5-1650, 32GB DDR4 2133mhz 1U server on a x10 board recently and it performs so good as a server (99%idle) with thousands of users on the NGINX HTTP/D (+php+mysql respectfully) on FreeBSD 10 (the network efficient unix distro).

My aim is to get QEMU running windows 10 (seen this with a 980ti running in win10 over a k6700 vt-d / vt-x pass through for the gpu ) with stunning performance while running in Archlinux (sharing the same CPU), though a dual-cpu setup on a supermicro with a xeon could certainly show me something better especially keeping the CPU's separated for linux+windows while serving it all up from the same psu+board... damn! no more dual-booting and for that EXTRA power? okay I'll dual-boot windows with the twin-cpu 'if required'.

As a matter of personal preference I suggest you give archlinux a shot, i3-wm is great (a little buggy, but awesome). Been running in arch+i3 since january 2016 and honestly can't fault it, it's bleeding edge, often enough that pacman (the package manger) loses uri sources for older-software and you need to do full upgrades, as for nvidia itself wow f-king-wow. 300fps in CS:GO on a 480GTX and unreal tournament UE4 engine just about plays with reasonable graphics options, but this wasn't the case prior to a driver upgrade in the last months, so nvidia+linux are playing VERY nicely now for older cards, I'm not rich enough to try new but there has never in my knowledge been a better time to nvidia+linux gaming, and with Vulcan API for the 500+ series to pascal gpu's right now showing a leading performance increase over OpenGL it makes me want to sit there biting my fingers and learning to dev something, albeit the boiler plate on the Vulcan API is a bit of a handful, and I'm not favoring a C++ SDK any time soon (preference for C here).

Finally got around to actually run the Geekbench benchmark on my system: https://browser.geekbench.com/v4/cpu/13732026