Lots of boxes arrived yesterday. One aspect, that’s very much in favor of not building your own system is the large amount of trash that buying everything in discrete parts produces. The packaging by and large is pretty nifty, but I used to care about this more. Nowadays I would be happier with much less packaging.

PC assembly has gotten even easier over the years. Especially the placement of the CPU is now a cinch. During assembly I remembered, why I prefer big cases.

For one, I couldn’t mount the liquid cooler at the top. There was just no space with the mainboard filling up the whole cavity. And then connecting everything up in a compact case is very cramped.

The mainboard looks a little tacky, but feature wise its very nice. I especially like that I got an extension board, with which I can install 4 more M.2 SSDs.

The CPU packaging was pretty much over the top. Like I purchased a Rolex watch or something. But installation has been super simple and the momentum screwdriver for fastening the CPU in the socket made it even more idiot-proof. Cool.

From the waterpump of the cooler I don’t hear any noises and the fans can be made to run quiet, if the system is idle. The system does rev up when its working though. A real positive side effect of water cooling, is that there is more room on the mainboard, where you don’t have to worry about a massive air-cooler and its placement and possible entanglement with other cables.

The MSI is a huge card with three fans. It just barely fit into the compact case. It’s the loudest component when starting up. Maybe the two fan variant is a better buy ?

The SSD were easy to install and they worked. But I underestimated how much stuff I have. 6 TB would have been better. One disk has 1TB free the other 0.5 TB.

The only component I might replace is the PSU (but I probably won’t). Its fan noise could be better, though it is quiet. The PSU fan is supposed to stop, when its idle, but I guess this system never lets it idle.

The case is just as good as my Phanteks in every respect. Very, very good. Out of sheer luck, the Define 7 Compact has a USB-C front plug and the motherboard has a spare USB-C port. I didn’t remember to check the case for compatibility, but everything fits perfectly.

Once I got the fans dialed in, the new box is much quieter than the old one.

Initially the Ubuntu 21.4 install set up the “Nouveau” driver and put me into Wayland. Things appeared fairly stable, but I am sceptical. The graphic card fans kept running at 100% though and were unpleasantly noisy. When I changed to the proprietary NVIDIA driver, the fans shut off. A quick check with OBS in Wayland, showed that I couldn’t capture “Firefox” or “Terminal” just like before. So no dice… Back to X11 and the proprietary driver.

In the BIOS don’t set the fan connctor, that is feeding the watercooler pump to “silent”. This seemingly turns it off. I saw temperatures climbing rapidly and had to shut off the machine before it fried itself.

Boot times are much better now. After the BIOS is through, the machine boots into the desktop in like three seconds. Unfortunately the BIOS boot process is still fairly length. There is an ultra fast BIOS boot option, but then you can’t get back into the BIOS. I might try this some time as there is a BIOS CMOS reset button on the board…

Ironically, once I moved the old box from Display Port to HDMI and removed the DVI connection, the old box reboot time was drastically improved. That makes no sense to me, but whatever.

The new box can be put to sleep and brought back. That’s also fairly huge, though not as huge as it would have been, if boot times were still abysmal.

Geekbench 5 results. Now I knew these numbers before I bought the new box. I looked mostly at the “clang” result to estimate the gain to be had:

I only did one run of Geekbench 5 as the scores looked sensible:

First the benchmark that vindicates the purchase. Here I rebuilt all projects of the MulleFoundation. That’s something I would do quite often during a mulle-objc release. A semi-annual event…

I am doing this twice to have the caches filled. It’s not much of a difference though.

This builds all projects in parallel, and as each project is built with ninja all files are built in parallel (up to load)

If we add user and sys together and divide by real, I believe we have a measurement of the parallelism:

A speedup of 31 with 20 cores and 40 hyperthreads sounds reasonable.

So that’s approximately two times faster than the old box.

That’s 45 with 32 cores and 64 hyperthreads. It might be a case of slightly diminishing returns with the more cores available, but it still scales fairly nicely.

The second benchmark casts some doubt over the purchase though. Only one project is being rebuilt. That can happen quite often during daily development:

This may indicate that a six core machine with a higher clock rate might be doing better.

Initially the time i got was 26s. I had forgotten to install ninja. ninja makes a huge difference.

Parallelism ist just about the same as the old box. The reason why this isn’t more, is because mulle-objc consists of many small projects, that just can’t saturate the available cores. Six is likely close to the average number of files to build in my projects. Throwing more cores on this problem won’t make it faster. 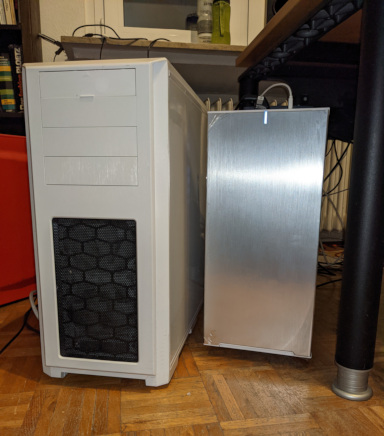 There are some very nice quality of life improvements that the new box brings. It is in all respects a better machine than the old box. But the old box isn’t yet obsolete in 2021.

I didn’t mind the somewhat louder old box, tough the relative quietness of the new one is appreciated, when it is quiet. As the workload increases the fans rev up and that may eventually get on my nerves. I might have to tweak this some more.

It might be necessary to restructure my projects, so that more files are compiled during a cmake/ninja invocation to improve parallelism. Project composition is currently done at the link level with mostly static libraries. Maybe the composition should be at the source file level at least as an option.

So with hindsight, I probably could have waited a bit longer with the purchase of a new work horse.